How do writers choose a topic to write about?  What factors influence the setting, the characters, the time frame, the key events?

I suspect that every author will have a slightly different answer to these questions.  In my case, there was a different set of criteria which influenced the topic for each of my six (so far) novels.  I often think it would be easier if I had a consistent topic and some repeat characters, as the late P D James had with her detective stories.  The problem for me is that I get restless with repetitive tasks.  I would make a very poor assembly line worker.  I changed my major in college twice – from architecture, to mathematics – before settling on physics.  As a naval officer, every day was different.  As a salesman of heavy electrical equipment, every sale was unique.  As a manager and as a management consultant, every situation one faces is different.

Starting with Fishing in Foreign Seas, I tried to stay within my experience: romance, Sicily, the north-eastern US, raising a family and the sale of heavy electrical equipment.  I added some sex and some intrigue for seasoning.  For me, this worked, but I wanted something grander, more important.

What could be more important than sin?  What could be grander than six life stories entwined?  That was the premise of Sin and Contrition.  With a chapter devoted to each sin, I found that each character developed uniquely, and that my imagination could add interesting – but credible – surprises.

Efraim’s Eye came about because of a charity assignment I had in Mexico, where we suspected the chief executive of the charity of being corrupt.  I felt that a corrupt charity was interesting, but probably not gripping.  But, what if the purpose of the charity’s corruption was the financing of a terrorist attack?  And what if there was an intense love story?

The feedback from readers of Efraim’s Eye was very good: it was an exciting thriller with believable characters.  I decided that I wanted to write another thriller; this time about the drugs trade, and I decided that Afghanistan, with its huge output of opium for heroin, and being in the public eye, was the setting.  But, I also needed an immediate destination for the heroin, as very little of it is consumed in Afghanistan.  Some research convinced me to make Iran the home of the bad guy and the immediate destination of the heroin in The Iranian Scorpion.

Before I finished Scorpion, I started on a novel in the first person about a bright, self-conscious boy who hears unfamiliar voices, which, over time, he attributes to representatives of God and the devil.  I wanted to write a serious novel which, through the life of Henry, explored psychological, theological, and sociological issues around the choices we make in our lives – for better or worse.  I wrote three chapters of Sable Shadow and The Presence before setting it aside: I had lost my way and needed to take a break.  But with the completion of The Iranian Scorpion, I came back to Sable Shadow with new enthusiasm, and I completed it.

In the back of my mind was another novel, slightly similar to Sable Shadow, but an allegory, told in the first person, set largely in the Middle East, with Middle Eastern characters, and dealing with the search for meaning in life.  I’m working full tilt on it now, but before getting really started, I wrote Hidden Battlefields, another thriller, this one about a huge shipment of cocaine from Peru to the ‘Ndrangheta mafia in southern Italy. Four of the main characters from Scorpion are in Hidden Battlefields.  The theme of Battlefields is how major conflicts in our values and priorities can affect who we really are.

As I look back on the progression of novels, two trends stand out, both of which amount to increasing levels of challenge for me as a writer:

First, my craft as a writer is being challenged on all fronts: character development, thematic subtlety, language, credibility and interest.

Second, I have to do more and more research, to the point now where I spend more time on research than I do on writing.

My sixth novel, Hidden Battlefields, has just been published.

A thriller tracking the movement of $250 million in cocaine from Peru, east of the Andes, down the Amazon, across the Atlantic and northwest Africa to southern Italy. Four of the main characters from The Iranian Scorpion star in Hidden Battlefields. Robert Dawson is the DEA agent who goes under cover as a Shining Path operative. David Dawson, a retired US Army general and Robert’s father, adds determined confusion. Mary Jo Mignot, the defence contractor with a top secret clearance, is David’s love interest. Or is she Robert’s? Kate Conway, the Pulitzer-Prize-winning journalist, is Robert’s love interest. Or is she David’s? New characters representing the Shining Path, Peruvian, Maoist terror organisation, and ‘Ndrangheta, the Italian crime syndicate are introduced.

The theme of the novel is conflicting personal priorities, and how they affect our identities. 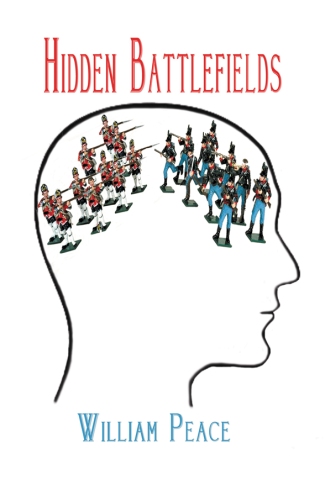 Creating a cover design is a difficult process.

I always start with a cover concept in mind.  My latest novel is a thriller which has as its theme how conflicting priorities can change who we are: our identity.  One of the characters is a international, freelance journalist, who has found that long-term relationships don’t work very well when one is working in a country like Afghanistan.  She has therefore decided to focus on her career in journalism, and, in doing so, she has won a Pulitzer prize.  But, she is lonely and longs for a loving relationship – a relationship which will make her the person she wants to be.

Given this theme, I asked the cover designer to produce a graphic which included a transparent human head inside of which are toy soldiers engaged in combat.

Here is what they came up with initially: 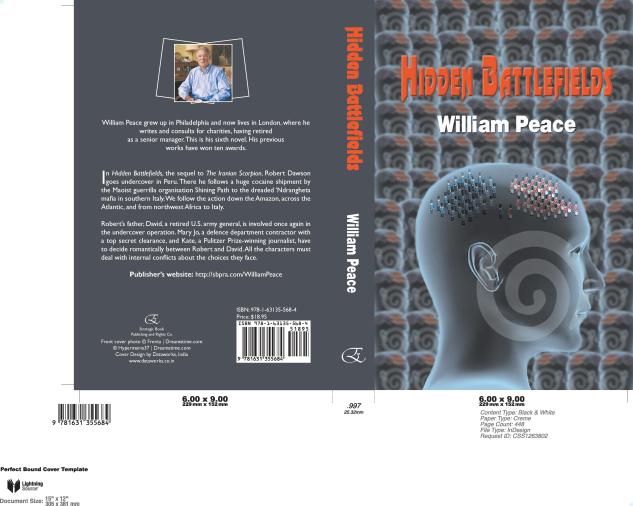 Not surprisingly, I didn’t like it at all.  My wife said it looked like the cover for some kind of a cult book.  I objected to the spirals; I was told that they are watermarks which will be removed when the head image is purchased.  I didn’t like the iridescent blue: that had to go.  The dozens of small images in the background just added confusion.  The soldiers (which one can barely see in this image) were too small and didn’t look as though they were fighting.  After some discussion, I sent the designer copies of the images below: 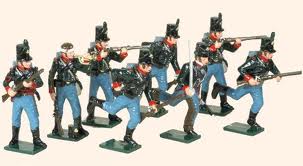 I found these images on the internet, and the only problem was that they weren’t high resolution.  The designer worked on the images to sharpen them.

Then, rather than have a transparent, three-dimensional head, I opted for a simple, two-dimensional outline of a head.  I asked that the colour scheme be simplified: red, blue and black only.

Then we got into a lengthy back-and-forth about the fonts on the original cover, which I didn’t particularly like.  My wife and I were in Rome a couple of weeks ago, and at the check-out counter of a local supermarket, she spotted the cover of Paulo Coelho’s latest novel which appeared to have an embossed font.  Very stylish!  I sent a picture of the cover to the designer, but it turned out that if ‘Hidden Battlefields’ were to be in that font, it would have to be on two lines rather than one.  So we compromised on the font. 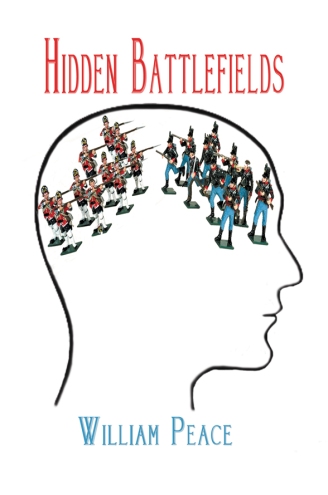 The book itself should be available in a week to ten days.

In this Monday’s Daily Telegraph there was an article ‘Book Minnow Opens New Chapter in Publishing’, written by Andrew Cave.  What particularly caught my eye was the graphic below.  (Sorry that the graphic isn’t very clear, but it wasn’t included in the online version of the Telegraph, so I had to scan it.)  You may be able to make out that the source of the graphic is ‘PwC’, which I assume means Price Waterhouse Coopers.  This chart looks rather suspicious to me for several reasons.  First of all the total volume in dollars remains pretty constant over the ten year period: $16 billion.  The total value should be increasing with inflation and with the number of readers, worldwide.  Secondly, the value of Ebooks & Print and Audio books will be equal in three year’s time; since Ebooks are less expensive than physical books, the implication is that Ebooks will be out-selling physical books by about 50% in volume terms.  If this is the case, it’s the first time I’ve heard of it.  And third, the individual plots are both pretty much straight lines.  While this may be true for physical book sales, the growth of Ebooks has been anything but linear.  Strangely, this graph was not referred to in the article itself. 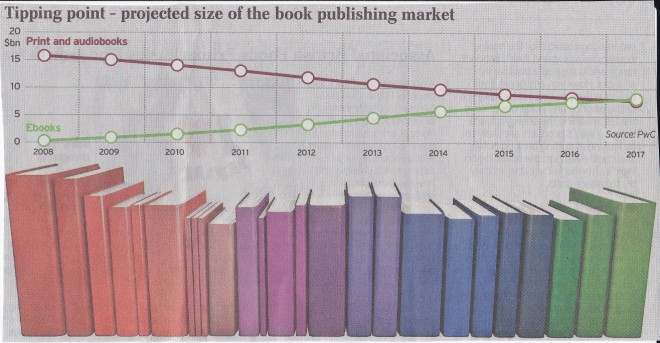 The article itself was about the self-publishing house, Blurb, founded by Eileen Gittens in San Francisco in 2006.   The company has a turnover of $90 million this year.  The article says that Blurb has published 3 million books.  Does Mr Cave mean 3 million copies of books?.  And it says that “a new title comes over the servers every 2.1 seconds”.  This would literally mean that Blurb is publishing nearly 15 million new titles every year.  I find this difficult to believe, given the turnover of $90 million.

But, let’s set the numbers aside.

Blurb is a software-based company which allows the author to choose Ebook or print copy formats.  The minimum order size for printed books is 750.  Blurb’s online platform gives the author tools to choose layouts.

Naturally, Gittens sees many advantages her company has over traditional publisher.  Not the least of these advantages is getting published at all.  Blurb’s price includes its mark-up.  “If the price of printing your book is £5 because you’re going to order a few thousand,” Gittens says, “and you’re going to sell that book for £25, we would literally send you £20 every time somebody buys a copy.”  (This must be if you happen to have one of the titles that Blurb has for sale on its website.)  Blurb also sells through Apple and Amazon.

I can imagine what my publisher (a co-op publisher) would say about Blurb.  “They don’t produce their books professionally.  They can look homemade, unedited, without concise layout or a professionally designed cover.  Besides, they offer no marketing help, which we offer at extra cost.”

Perhaps the most interesting point in this article is this: Gittins believes many people could one day have their own book, as well as their own Facebook page.  “It’s part of  your personal brand,” she says.  I think this is true.  Many people would like to leave a record of what they have achieved in life.  The only problem is: would anybody want to read it?