-There was an articled in the April 21st edition of The Daily Telegraph entitled ‘Want to write?   Expect to earn £11,000 a year’.

This was sufficiently eye-catching that I think it bears repeating.  I quote:

To many, it is the dream job: toiling to create a fine work of literature or academia.  But the reality of being a writer has been laid bare in a new report highlighting the low earnings many endure.  A study, conducted by Queen Mary University of London, showed only one in ten authors can afford to earn a living from writing alone, a drop from 40% a decade ago.  A typical professional writer, it found, earned £11,000 annually.  In real terms, the average earnings of authors is down 8% since 2005, according to the report commissioned by the Authors’ Licensing and Collecting Society.  Five percent of authors earn 42.3% of all income earned by writers, with the struggle for those working in non-fiction and academia particularly acute.  The study points to a publishing world where houses are less willing to take a chance on new authors, opting instead for ‘safe bets’ and celebrity writers.  The report, entitled The Business of Being an Author and based on a survey of nearly 2,500 writers, noted: ‘For the majority, writing remains a low-earning profession.’  A remarkable 17 percent of writers did not earn any money in 2013 despite 98% having had work recently published.  Women were found to earn 80% of the income of their male counterparts. Nicola Solomon, the chief executive of the Society of Authors, said publishers had been compelled to tighten their belts in recent years, investing in high-demand authors.  ‘There is a tendency towards safe,’ she said.  ‘But do we want safe?  Surely the whole point of reading is to be introduced to things that are daring and challenging and different?’   The report was ‘a bit depressing’, she said.  Earlier this year, a YouGov poll found being an author was the most desirable job in Britain, with 60% of people claiming they would like to do it for a living.

This doesn’t surprise me and it confirms some of my own experience.  For me, as a retired business executive, I’m not writing to make a living.  I’m writing because I enjoy it, and because people who read my books tell me that they enjoy them.  I don’t feel that I have to concentrate on ‘what will sell’.  Rather, I can concentrate on what interests me and what will interest some people.  As long as I’m in good health, I don’t really have a deadline.  Someday, if I’m lucky, one of my novels will ‘go viral’, and I’ll have a £11,000 windfall!

Having read Henry Marsh’s Do No Harm, which was shortlisted for the Costa Book of the Year Award, I have now read H is for Hawk by Helen Macdonald which won the top prize. 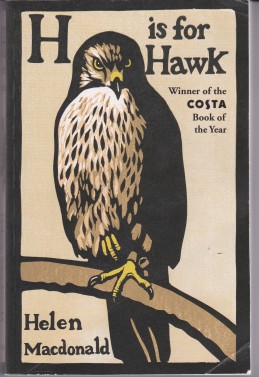 H is for Hawk tells the experiences of Helen Macdonald, a writer, illustrator, historian and lecturer at Cambridge University in training a wild hawk. Macdonald had some advantages in this task: she was fascinated by falconry and hawks as a child, and she had experience of hunting with hawks, but she had never trained a wild hawk to hunt. There was a major disadvantage: her much-loved father, a renowned photographer, had just died suddenly when she acquired the hawk for £800 from a breeder in Northern Ireland. Much of the book deals with the intense commitment and frustrations which the falconer must endure over the lengthy process of winning the trust of a wild predatory animal so that it works together with the falconer in killing wild game. The goshawk in the book has personality: feral, proud and beautiful, unpredictable, iconic. One learns, incidentally, that Macdonald is a scholar, an intelligent and sensitive person, but the author also exposes her vulnerabilities: in particular, her crippling grief over the loss of her father. In parallel with the story of Macdonald’s goshawk, she tells the story of T H White, now deceased, a dedicated, but somewhat eccentric falconer and the author of The Goshawk. We learn of his mistakes and his anguish as he tries to train a goshawk. So this book operates at several levels: a present, objective account of the training of a wild hawk; there is a past, reported account of the training of a different hawk; there are psychological explorations of both the author and her role model, T H White. This may sound rather complex, and, in a way, it is, but Macdonald weaves it all together beautifully so that it is quite natural.

The writing, in style and language is exquisite. In particular, the descriptions of natural settings and the behaviour of the hawk are breath-taking. For example: “. . . she (the hawk) sees something through the trees, out there on the other side of the hedge. Her pupils grow wide. She snakes her neck and flattens her crown, and the tiny grey hair-feathers around her beak and eyes crinkle into a frown that I’ve learned means there’s something there.” And: “The fields are shorn, yellowed into stalky, rabbit-grazed sward spotted with foraging rooks.”

H is for Hawk is clearly a major labour of love. This love and its result: a durable classic about nature, surely merited the Costa Award.

As a child, I was very interested in falconry; I read everything I could lay my hands on the subject – even flirting with the idea of obtaining a hawk. For me, H is for Hawk has a special resonance, but I suspect that some potential readers may be put off by a book on falconry. For those potential readers, I would say, “This isn’t just a book about falconry. It’s a book about nature, the human condition, grief, joy, life and death.”

No less a literary figure than Sir Salman Rushdie has labelled a pair of novelist friends (Carey and Ondaatje) as cowards.  In case you didn’t hear about it, on May 5, the global writers’ organisation, PEN, awarded its annual Freedom of Expression Award to Charlie Hebdo, the French satirical magazine which lost eight journalists during an attack by Islamic extremist gunmen in January.  Charlie Hebdo had satirised Islam – amongst other targets.

Rushdie, writing on Twitter and  making reference to Luigi Pirandello’s play, Six Characters in Search of an Author, said, “The award will be given. PEN is holding firm. Just six pussies.  Six authors in search of a bit of Character.”

Carey acknowledged that the murders of the journalists were an “hideous crime”, but he questioned PEN’s wish to champion Charlie Hebdo.  He said, “Was it a freedom-of-speech issue for PEN America to be self-righteous about?  All this is complicated by PEN’s seeming blindness to the cultural arrogance of the French nation, which does not recognise its moral obligation to a large and disempowered segment of their population.”

Gary Trudeau, the American cartoonist  who produced the Doomsday comic strip said, “By punching downward, by attacking a powerless, disenfranchised minority with crude, vulgar drawings closer to graffiti than cartoons, Charlie wandered into the realm of hate speech.”

Jo Glanville, director of English PEN, said that the protesting authors appeared to be confused between the principle of free speech and endorsing the message of Charlie Hebdo.  “The big mistake that these authors make is that they are essentially withdrawing their support for the principle of freedom of expression.  If freedom of expression means anything, then it’s supporting work that you don’t like.”  She said that Rushdie knew all too well the risks of causing offense: “It’s highly understandable that Salman Rushdie supports this in the way that he does.  When he was hiding after writing The Satanic Verses he was attacked by writers including John le Carré and Roald Dahl.” 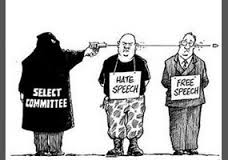 In my view, Ms Glanville has hit the nail on the head: the objecting authors are confusing supporting freedom of expression with supporting material with which you don’t agree.  If one starts saying, “Well, I don’t think they should have said that and therefore I don’t think they deserve a prize for saying it”, one introduces an element of censorship into the process, which is intolerable.

I also don’t think that Carey’s comments about the French nation have anything whatever to do with the issue at hand: Charlie Hebdo is not a mouthpiece for the French government or the French people.  And I think it is wrong for Gary Trudeau to assume that Charlie Hebdo was “attacking a powerless, disenfranchised minority”, but if they were, and even if it was “hate speech” does it have to be suppressed?  In his column in The Times, Oliver Kamm wrote; “No one has a right to complain at having their religious beliefs mocked.  No one is ‘disempowered’ by being offended.  No one is entitled to redress for hurt feelings.”

For me, as a writer, the question is: what should I say?  I should be the judge of whether what I write is so offensive to some group of people that they will not see it as rational, but only as an attack.  If what I say is seen only as an attack, why do it?  My writing includes some religious content: Christian, Muslim and Jewish, and these passages, in particular, are where I have to ask the question.  But once I have answered it and once I have written, I fully expect that even those who disagree with what I’ve said will support my right to say it.