There was an article in last Sunday’s Telegraph by author Robert Colville explaining how the electronic black market threatens authors’ livelihoods:

“There are two things you do when your book first gets published.  First, bookmark your Amazon page, for obsessive checking of sales rankings.  Second, set up a Google Alert, in case anyone is talking about it.  Or, as it turns out, stealing it.  A couple of weeks after I became an author, I got an automated email: a free version of my book had popped up on a site called DailyUploads.net.  A few hours later, my inbox pinged again: I’d been pirated.

“My mistake, it turned out, was to imagine the pirates as anglers, plucking the juiciest titles.  In fact, they’re trawler-men, sweeping their nets across the publishing schedules. . . . 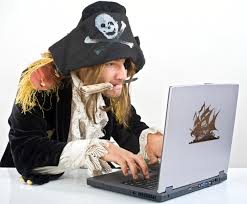 “If you buy an eBook on line, it will come in a format that can’t be shared.  But there are free software tools that strip those protections away.   The resulting files are distributed across the internet – not for profit, but out of a conviction that people should be able to read what they want without paying for it, just as they should be able to watch films or listen to music.  And, like everything else, it’s speeding up.  In 2008/9, titles took 19 weeks to hit the electronic black market.  This year, Lloyd Shepherd, a British author of historical thrillers, published his fourth novel – and found a ‘boxed set’ of all four available for download within 72 hours.

“So who are these pirates? When Shepherd received the dreaded Google Alert, he went onto the forums to find out what motivated them.  ‘The people who are doing this systematically have got some very odd justifications for it’, he explains.  ‘Many insist that the information should be free.  Others have a sense that writers are wealthy and publishers are wealthy, and therefore they’re entitled to steal from them.’  In fact, as Philip Pullman, president of the Society of Authors, has pointed out, they’re poor and getting poorer – something that Pullman links directly to piracy.

“. . . according to government research, only 1% of UK internet users are reading eBooks illegally, compared to 9% for music or 6% for films.  But, says Stephen Lotinga, CEO of the Publishers Association, this still amounts to 7.2 million titles per year or 10% of eBook sales.

“Publishers need to play a constant game or Whac-a-Mole with the illegal sites, because the more convenient it is to download illegally, the more people will be tempted.”

I just completed a troll through the Google search of the titles of my six published books.  I found seventeen suspected pirate sites dealing in at least one of the six, with a maximum of five sites for one of my published novels.  This count doesn’t include foreign sites which were selling my novels at near market prices (my publisher has a substantial foreign rights network).  It also doesn’t include sites to which I sent a DMCA (Digital Material Copyright Association) infringement notice.  In the past, I have had a good response from these notices: to ignore them is illegal, and usually my title will magically disappear.  But many sites do not have a link to a DMCA notice, and some that do have a link over complicate the process.  I’ve sent my publisher the list of the seventeen for them to work on.  After all, they have may more books than my six at risk!

In case you didn’t see it, there was an article in The Daily Telegraph last month: ‘A New Chapter as Sales of Print Books Recover’, and it goes on to say:

“. . . Reports of the death of the traditional book have been greatly exaggerated, according to the definitive annual survey of the industry.  The Publishers Association study (UK) revealed sales of print books are rising while digital sales are down for the first time since the invention of the e-reader.  Experts say the claim the ‘physical book is doomed’ can ‘finally be refuted’.

“Stephen Lotinga, the Publishers Association chief executive said: ‘Those who made predictions about the death of the book may have underestimated just how much people love paper’.

“This year’s annual report shows physical book sales of £2.76 billion in 2015, up from £2.75 billion in 2014.  Digital sales dropped from £563 million to £554 million, the first year-on-year fall since 2011 when the association started measuring e-book sales.  The change has been attributed to readers realising the pleasure to be taken in a physical book, as well as the popularity of lifestyle non-fiction that does not translate well to digital.  Among those are adult colouring books, which have seen a boom in the last year, along with cookery books and retro humour such as the spoof How to . . . Ladybird series, which proved popular at Christmas.

“Hardback versions of much-hyped new works such as Harper Lee’s Go Set a Watchman also proved best sellers, along with cult novels such as The Girl on the Train by Paula Hawkins.

“Joanna Prior, managing director of Penguin General Books, said: ‘Both the increase (in physical book sales)and decrease (in digital sales) are too small . . . for us to make any claims for big shifts in consumer behaviour or make predictions for what lies ahead.  But I do think any suggestion that the physical book is doomed can now be definitively refuted.’

I, for one, am pleased to see these results.  In the first place, I have never been able to convince myself to read a digital book.  For me, having real book in my hands and being able to turn the pages is the essence of comfort in reading.  When I was doing a lot of driving, I found that audio books were a much better form of entertainment on a long drive than listening to the radio, so I was a regular user of the audio books section of the local library.  In fact, when I stopped taking long trips by car, I wanted to read the Qur’an.  I downloaded a copy to my iPod and listened to in when I was in the gym.  (Now, when I’m in the gym, I watch BBC News, and, occasionally, listen to country music.  I find the activity in the gym too distracting to concentrate on a good, new novel.)

Secondly, I get a sense of personal satisfaction from producing a physical book: one that I can hold in my hands of give to a friend.  And, finally, author royalties tend to be better – per unit sold – for physical rather than electronic books.

There was a column in The Daily Telegraph last month by Charlotte Runcie, who, as far as I can tell, is a poet and freelance journalist.  Her column includes five egregious examples of famous authors whose books were turned down by publishers.

Stephen King received so many rejection letters for Carrie that he kept them all on a spike in his bedroom.  When it was first published in 1974, it was a runaway success, and the paperback sold more than a million copies in its first year.

Harry Potter and the Philosopher’s Stone

J K Rowling’s first Harry Potter manuscript was snubbed by 12 different publishers.  Eventually, Bloomsbury took a chance on the debut novelist: they offered an advance of £1500 and suggested she get a day job, just in case.

The Spy Who Came in from the Cold

John le Carré’s Cold War classic was brutally rejected by a publisher whose dismissive verdict was that the writer hadn’t ‘got any future’.  Still, it fared better than William Golding’s Lord of the Flies, which was turned down 20 times.

This daring novel was rejected by so many American publishers, including one who recommended ‘it be buried under a stone for a thousand years’, that Vladimir Nabokov eventually published it in France – a more enlightened market.

Herman Melville’s manuscript was dismissed with a despairing note from a publisher who said, ‘First, we must ask, does it have to be a whale?  While this is rather delightful, if somewhat esoteric, plot device, we recommend an antagonist with a more popular visage among the younger readers.  For instance, could not the Captain be struggling with a depravity towards young, perhaps voluptuous maidens?’  The book was eventually published, whale and all, but Melville had to fund the typesetting himself.”

As Andrew Michael Hurley said about the frustrations of writers finding a willing publisher, in a previous post: “So many times you feel like giving up and thinking, this isn’t going to happen.  But it does. It absolutely does.”

There is a story in The Daily Telegraph last month about how Andrew Michael Hurley achieved success with his first novel, The Loney which won the Costa Prize for the year’s best first novel.  This May, it won the Book of the Year award at the British Book Industry Awards.   Hurley is a former teacher from Preston (northern England).  He self-published two collections of stories before taking up part-time work as a librarian, so that he would have time to work on a novel.  He spent almost four years working on The Loney before showing it to friends and colleagues.

The people who read it, he recalls, “Said it was great – but where would it go in bookstores?”  (The novel is set on a wild stretch of northwest English coast, and mixes captivating descriptions of the landscapes with a mixture of the ridiculous and the terrifying.)  The article says, “It follows the activities of a small group of hardline Catholics – the narrator, his developmentally challenged adult brother, his fervently religious parents and two elderly friends – as they mount an expedition to a holy well in the company of their new parish priest.”

Three years ago, Mr Hurley couldn’t find a publisher anywhere.  “He sent it to agents and small publishers, all of whom responded either with silence or with polite notes of refusal.  Eventually, searching the internet for possible publishers, he came across Tartarus, a small press specialising in ‘literary supernatural/strange/horror fiction’ and run from a house in the Yorkshire Dales by the writers Ray Russell and Rosalie Parker.  ‘It was just one of many books when it arrived,’ says Russell.  ‘Ros read it and loved it, but I was slightly sceptical, mainly because over the years we’d had the impression that our customers preferred short story collections.  But as Ros said, the whole idea of Tartarus was to publish books that we liked – and if we liked then, hopefully other people would as well.’

“In London, the sharp-eyed publisher Mark Richards at John Murray read the book and recognised it, he says, as ‘a first novel of extraordinary assuredness.  It felt like the work of someone who had been writing for 40 years.’  He made contact with Hurley and the proprietors of Tartarus and arranged ‘to bring it to the mass market audience that the book could definitely reach.’

“Hurley says, ‘I’m 41 now, so it’s been a long time coming.  I’m very grateful that I can concentrate on doing something that I love more than anything else.  All the rest is just an added – though very welcome – extra. . . . I’m terrible at giving advise on writing,’ he says, ‘but perseverance has to be the key.  So many times you feel like giving up and thinking, this isn’t going to happen.  But it does.  It absolutely does.'”