My seventh novel is going to be an allegory.  It will be written in the first person and set mainly in the Middle East.  The themes will be philosophical, theological, psychological and social.  I have never written an allegory before (at least not knowingly), and I think it will be an interesting challenge.  But more importantly, I think an allegorical approach is the most effective way to communicate with the reader about the themes I have in mind.

In this instance, the indirectness of allegory is what appeals to me: themes are suggested to the reader without being specific, and the reader is at liberty to interpret the themes in her/his own way.  In my view, this approach adds richness to the presentation.

Wikipedia defines ‘allegory’ as: “a rhetorical device in which characters or events in a literary, visual, or musical art form represent or symbolize ideas and concepts. Allegory has been used widely throughout the histories of all forms of art; a major reason for this is its immense power to illustrate complex ideas and concepts in ways that are easily digestible and tangible to its viewers, readers, or listeners. An allegory conveys its hidden message through symbolic figures, actions, imagery, and/or events.”

A visual example is this painting, ‘Allegory of Music’, by Filippino Lippi; painted in 1475 to 1500: 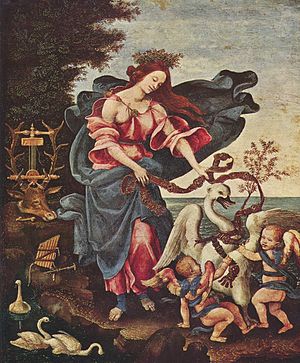 I have to confess that I ‘don’t get it’ when looking at this picture.  Perhaps that is because it makes use of Greek mythological symbols which were popular during the High Renaissance.  But I concede that the painting does evoke feelings of motion, as with music.

Last night I watched the Ingmar Bergman film The Seventh Seal, which was released in 1957 in black and white.  I remember being a fan of Ingmar Bergman when I was in university, but I don’t think I ever saw this particular film before.  The film is considered a major classic in world cinema, perhaps because of its scenes and allegorical content.  While I certainly enjoyed watching it, I have to admit that it would not be a money-maker if it were released today.  In the film, Bergman transports the viewer to Sweden in the early Middle Ages.  The principal character is a knight who has returned home from a crusade a the time the Black Death is sweeping through Sweden.  The knight feels that his life has been wasted and fears for his death.  He wants to perform ‘one meaningful deed’, and longs to hear the voice of God.

In this scene from the film, the knight (on the right) offers Death his choice of chess pieces; Death chooses black.

The film is peopled with diverse characters: a woman who has been condemned to death for speaking with the devil; Death himself who play an extended game of chess with the knight; the knight’s wife who has waited for him all these years; there are religious zealots, criminals, actors, and immoral people.  For me, Bergman seems to be saying something like the following: God and the devil are invisible, and God may seem silent; death is inescapable; and ‘one meaningful deed’ may be enough.

Bergman is never specific in his points.  For me, this is the beauty of allegory.  The reader (viewer or listener) has to form his or her own conclusions.

In any event, this film gets one thinking.