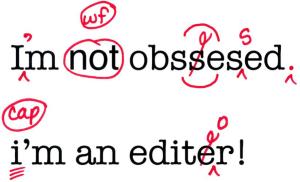 Yesterday, I received the edited copy of my seventh novel back from the editor.  For me, the way it works is that I – as the author – am responsible for professional editing of my books.  The publisher will arrange for editing, but the author has to pay for it as a part of the co-operative publishing  deal.  On one occasion, I used the publisher’s editor, but never again.  It was a less expensive fee than my usual editor, but a lot more costly in my time and aggravation.  That editor didn’t understand that her job was just to check the grammar, spelling, punctuation and syntax of the manuscript.  She did that (sloppily), and many of the changes she made were incorrect, and had to be reversed.  This made me wonder how competent she was at finding the real errors I made.  But what really irritated me was that she made changes to the text so that the meaning I had intended was lost.  Clearly, she didn’t like the characters or my plot.

Vonda works for a large editing company and she has edited the other six of my novels, including my latest, which is 108,000 words.  (That will work out to be about 250 pages, and her company’s fees were just under $1000.)

To give you a sense of what she wanted me to change:

The above changes were made after I had read through the manuscript at least three times and my wife had read it once!  Sometimes we see only what we think should be there!

And then there were her really useful comments:

She made the following general comment: “This is somewhat of a departure from your previous works — more philosophical and thought-provoking.  The characters are, as usual, well-drawn, believable and sympathetic, and your descriptions of all the places Kareem visits made me feel as if I were right there with him.”

There is another step of editing: when the manuscript is laid out for printing, there are inevitably new errors – particularly in format – which creep in, and I will have to read it again carefully.

I haven’t told you much about this latest novel, because it hasn’t been formally copyrighted yet, but please ‘stay tuned’!