Last night, I heard, for the first time, evidence of the shared skills of composers and authors.  My wife and I went to a Royal Philharmonic Orchestra concert which featured Wagner’s Tannháuser Overture, Chopin’s Piano Concerto No. 2, and Beethoven’s Symphony No. 4.  Pierre Vallet was the conductor and Elizabeth Sombart was the pianist.  For me the music got better as the evening progressed.  I should explain that I am no music critic; I never played an instrument, and I can’t really read music, although I sang first tenor and then baritone in two different small singing groups in high school and college.

The Wagner piece was enjoyable, but it didn’t really engage me.  I kept thinking of Nietzsche’s criticism of Wagner: that he became an insufferable egotist.  Elizabeth Sombart’s recital of Chopin was very impressive.   I sat there and thought: ‘How wonderful it must be to be able to play like that!’  And Chopin’s music was lovely.  But it was Beethoven’s Fourth that really caught my attention.  I’ve heard it played at least a dozen times before, but, until last night, never by a live orchestra. 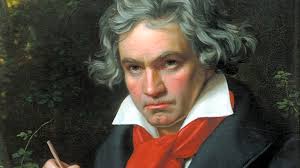 Composer of the Fourth Symphony

With this insight, perhaps I will enjoy classical music more than I have in the past.  And I have always enjoyed going to concerts.

2 thoughts on “Composition: Music and Prose”