A good friend of my wife’s and mine is an only child and when her father died, he left her a large industrial site on the outskirts of a major city.  For some years, she thought to sell it to a developer, but the area is not ideal for a residential – or commercial – development.  She is an art lover and gradually, she began to put on exhibitions by two or three eclectic artists in the buildings.  The site became known as an art venue and she developed a mailing list of ten thousand ‘members’ who pay a small fee to be advised of events and are admitted for free.  Recently, she put on an exhibition by three prominent artists in different disciplines from three different countries.  One of them is thinking of establishing a studio on the site. 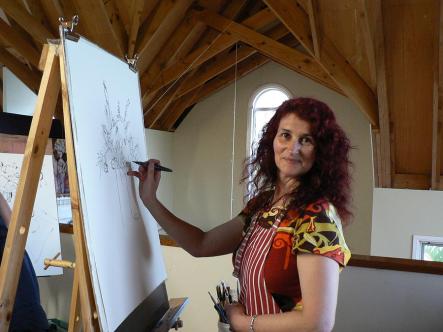 I asked her what she could do with a grant of one million euros.  Her face lit up and the ideas came tumbling out, but then she stopped and said, “But I haven’t any idea how to raise one million euros.”  We talked about it further, and she agreed that grants in that size can be obtained with the right connections and a persuasive proposal.  She certainly has connections in the art world, if not the actual fund-raising skills.

She also said that her surname will die out with her and she wants to somehow leave her name attached to whatever she does in the art world.  We talked about a way to do that, and then she was back on the subject of the kind of exhibitions she might put on.

I asked her to give serious thought to providing same ‘ladders’ for aspiring, but unknown artists with talent.  I pointed out that in every art discipline (including my own – literature, and including sports) there tends to be an enormous gap between the well-known, well-paid, big names and the skilled but unknown, and unpaid beginners.  I suggested two possible ladders for her to consider when possible.  The first was to put on an aspiring artists exhibition, at least once a year, with exhibitors selected by a panel of experts, and prizes being awarded to those judged to be ‘the best’ by another expert committee.  Perhaps provision could be made for the public to buy individual pieces, or for a gallery to pick artists to carry.  The second ladder was to establish an artist’s workshop space in the premises where young artists could come and paint or sculpt, where they could exchange ideas, and minimise the loneliness of their trade.  Maybe a small coffee shop would be opened to serve them, and perhaps interesting events could be organised.

As those of you who have been following this blog know, I feel that there are not enough ladders to success for aspiring artists of all disciplines.  In fact, in literature there are structural disincentives for the advancement of new talent: the tight grip of the traditional publishers on whom to select and promote.