This was the title of the cover story in the Review section of The Daily Telegraph on 20 January 2018.  The author is Katherine Rundell, author of The Explorer, which won the 2017 Costa Children’s Book Award. She begins the article by talking about a “state of consciousness that comes without calling.  It is as if the clamorous world has quietened and thinned. . . The other times I have experienced it were as a child, while I read.  It would take perhaps three pages, then the world became mute.  Its urgency vanished and its demands fell silent.  I could sit waiting outside a ballet class, music vibrating through the walls, and hear nothing.

“Children’s fiction accounts for 39 of the 100 bestselling books of 2017, and for about 24% of the UK book market.  There’s a lot of it about.  Still, the question I get asked most, when people hear that I write for children, is: why?  Why not write real, serious books for adults?  Because, I think, only for a child, can fiction crowbar open the world. 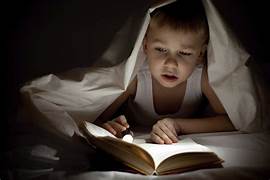 “The intricacies of reading evade description in the same way that dreams and music evade it, but there is, I think, something unique about the way stories colour the imagination of a child.  What do you see as an adult, when you read?  Do you deck out the characters in shoes, buttons, fingernails.  I think I don’t.  I read ‘Emma Woodhouse, handsome, clever and rich’, and I conjure up, in the space behind my eyes, an atmosphere rather than a distinct picture, colour, nose or lip. But children are doing something different when they read.  They have sometimes described to me in painstaking detail, scenes from books of mine which do not exist.  It happens relatively often: a child will tell me she loves the dance across the Paris rooftops in my book Roofhoppers, or the moment when a girl jumps from a tree onto the back of a wolf in The Wolf Wilder –  scenes I never wrote, although I wish I had.  Children, as they read, paint bright colours in the margins that fiction leaves open.  Their imaginations are snowballs.  When, as an adult, I read some of  my favourite childhood books, I was startled to see how slight some of them were, how many of the details I thought I knew by heart never even appeared; houses I had furnished myself, clothes I had embroidered, journeys  had added.  This is part of why I write for young people: children read the world into largeness.  When you write for a child, you build them a house; when they read, they expand it into a castle.

Ms Rundell tells about the illness of an older sister who died.  “I read through long periods of being alone, in hospital waiting rooms, and car journeys and friends’ houses.  Afraid, I took The Jungle Book or What Katy Did into bed with me alongside my bear, so that if my own fear overwhelmed me, there would be an exit door; I would fall asleep with an escape hatch clutched in one hand. . . . the stories I read then allowed me to believe that my sister didn’t only lose; she also won.  To fight with such gallantry and love is to win.

“The value of children’s books cannot, of course, be predicated on pain – books aren’t only valuable when we have something to escape – but, in fact, I am not sure that escapism is a large enough word for what those books did.  They taught me through the medium of wizards and lions and spies and talking spiders that this world I was newly inhabiting was one of wit and endurance.  Children’s books say: the stories of the world are infinite and various and unpredictable.  They say: you will count for something. They say: bravery will matter, love will matter.”

I was fortunate in having a mother and a grandmother who liked to read aloud.  They were probably motivated, in part, by the rapt attention I paid to stories by Rudyard Kipling, Robert Louis Stevenson and J Howard Pyle.