There is an interesting article in the 23 June 2019 issue of The New York Times written by David Streitfeld, titled “What Happens After Amazon’s Dominance is Complete? Its Bookstore Offers Clues”.  It is too long to quote in its entirety, but I’ve excerpted it below: 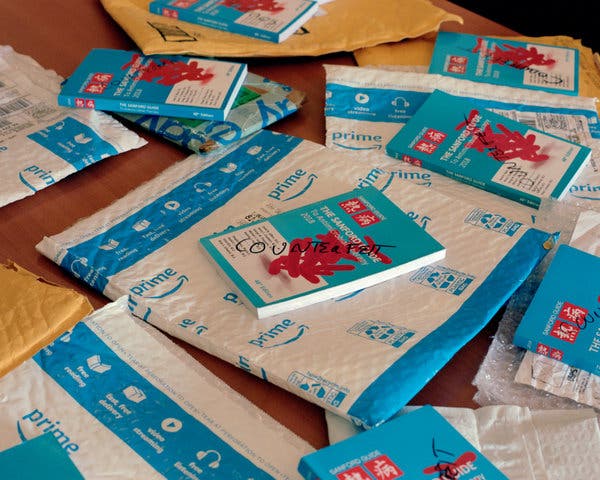 “’The Sanford Guide to Antimicrobial Therapy’ is a medical handbook that recommends the right amount of the right drug for treating ailments from bacterial pneumonia to infected wounds. Lives depend on it.

The guide’s publisher, Antimicrobial Therapy, has, for the past two years, been confronted a flood of counterfeits — many of which were poorly printed and hard to read — in Amazon’s vast bookstore.

“This threatens a bunch of patients — and our whole business,” said Scott Kelly, the publisher’s vice president.

Mr. Kelly’s problems arise directly from Amazon’s domination of the book business  But Amazon takes a hands-off approach to what goes on in its bookstore, never checking the authenticity, much less the quality, of what it sells. It does not oversee the sellers who have flocked to its site in any organized way.

That has resulted in a kind of lawlessness. Publishers, writers and groups such as the Authors Guild said counterfeiting of books on Amazon had surged. The company has been reactive rather than proactive in dealing with the issue, they said, often taking action only when a buyer complains. Many times, they added, there is nowhere to appeal and their only recourse is to integrate even more closely with Amazon.

The scope of counterfeiting across Amazon goes far beyond books. E-commerce has taken counterfeit goods from flea markets to the mainstream, and Amazon is by far the e-commerce heavyweight. But books offer a way to see the depths of the issue.

“Being a tech monopoly means you don’t have to care about quality,” said Bill Pollock, a San Francisco publisher who has dealt with fake versions of his firm’s computer books on Amazon.

An Amazon spokeswoman denied that counterfeiting of books was a problem, saying, “This report cites a handful of complaints, but even a handful is too many and we will keep working until it’s zero.” The company said it strictly prohibited counterfeit products and last year denied accounts to more than one million suspected “bad actors.”

What happens after a tech giant dominates an industry is increasingly a question as lawmakers and regulators begin asking when dominance shades into a monopoly. This month, lawmakers in the House said they were scrutinizing the tech giants’ possible anticompetitive behavior. And the Federal Trade Commission is specifically examining Amazon.

Those who write a popular book open themselves up to being “summarized” on Amazon. At least eight books purport to summarize Bad Blood, John Carreyrou’s best-selling account of fraud in Silicon Valley. The popular novel “Where the Crawdads Sing” has at least seven summaries. “Discover a beautiful coming-of-age story without all of the unnecessary information included in the actual novel!” says one that has 19 five-star reviews, all of which read as if they were fake.

“I’m furiou,” the author, Andrew Seen Greer, tweeted after people complained last summer that fakes of his Pulitzer Prize-winning novel, “Less,” were being sold as the real thing. There was a counterfeit edition of Danielle Trussoni’s acclaimed memoir, “Falling Through the Earth,” on the site that misspelled her name on the cover. Lauren Groff said that there was an ‘illegal paperback’ of Florida, her National Book Award nominee, on Amazon.

Dead writers get hit, too. Arthur Miller’s “The Crucible” was pirated. So was a volume of classic stories by Jorge Luis Borges. For 18 months Amazon has sold a counterfeit of Agatha Christie’s “Murder on the Orient Express” despite warnings in reader reviews that it is a “monstrosity,” dispensing with such standard features as proofreading and paragraph indenting.

This is not really negligence on Amazon’s part. It is the company’s business model.  “It is your responsibility to ensure that your content doesn’t violate laws or copyright, trademark, privacy, publicity or other rights,” it tells prospective publishers and sellers.

At Antimicrobial Therapy, the first warning that something was amiss with the Sanford Guide came with reviews on Amazon. “Several pages smudged and unable to read,” one buyer said in 2017.  “Seems as the book was photocopied,” said a second. “Characters are smeared,” wrote a third.

The company, whose books were sold to Amazon by distributors, did test buys. It got some copies from Amazon and others from its third-party sellers, including UsedText4u, Robinhood Book Foundation and 24×7 Book. Of the 34 books that Mr. Kelly bought, at least 30 were counterfeit. None of the booksellers responded to requests for comment.

Mr. Kelly wrote to the retailer’s founder, Jeff Bezos, saying, “Amazon is knowingly and willfully fulfilling most orders for our title with counterfeits that may contain errors leading to injury or death of their patients.”

Mr. Kelly got a response two weeks later from “Raj,” a member of “the Amazon Seller Performance team.” Raj said that an unnamed third-party seller had been barred from selling the book but that the seller might now appeal directly to AMT, and that if the company wanted to retract the whole thing, here was what to do.  “They were very reluctant to actually engage with us about the problem,” Mr. Kelly said of Amazon.

In February, Amazon included counterfeiting in its financial disclosures as a risk factor for the first time saying it might not be able to prevent its merchants “from selling unlawful, counterfeit, pirated or stolen goods” or “selling goods in an unlawful or unethical manner.”  Yet the company has such a grip on books that counterfeits do not seem to harm it. They might even increase its business.

“A book takes a year or more to write,” said Andrew Hunt of the Pragmatic Bookshelf, a North Carolina publisher of computer books that had at least one of its titles stolen. “But to steal the book and upload it to Amazon takes only a minute.  And when someone buys a counterfeit, the real author may get cheated but Amazon still makes a sale. You could ask, What’s their incentive to do something?”

Bait-and-switch schemes are common in the Amazon bookstore. If someone wants to title a book of self-published poetry “To Kill a Mockingbird” — and someone did — Amazon will sell it next to Harper Lee’s classic novel. Some customers wrote in Amazon reviews that they felt tricked by the author of the verse “Mockingbird,” whose many other titles include “War and Peace” and “For Whom the Bell Tolls.”

In February, Amazon introduced a plan called Project Zero. No longer would brands have to report counterfeits and wait for the retailer to investigate. Project Zero, Amazon said, would give brands “an unprecedented ability to directly control and remove listings.”

Mr Pollock said Project Zero was a further insult. “Why should we be responsible for policing Amazon for fakes? That’s their job.”

The communications impasse between Amazon and Antimicrobial Therapy was complicated by the fact that they did not have a direct relationship. So in December, AMT opened vendor site on Amazon, with the bookseller getting a commission of about 20 percent on each copy sold. Under this arrangement, Amazon tells Antimicrobial Therapy where the customer lives, and the publisher ships the book from Sperryville.

As AMT was getting ready this spring to release the 2019 guide, it proposed an even deeper integration with Amazon.  “To eliminate the possibility of Amazon facilitating the sale of counterfeit books, we would like to offer Amazon the opportunity to serve as a wholesaler of our titles, cutting out the middle man,” Mr. Kelly wrote to the company. It was, in essence, rewarding Amazon by surrendering to its dominance. “We’d rather not be on Amazon,” Mr. Kelly said. “But we felt like we didn’t have a choice.”

My view is that Amazon does not want to engage with this problem at the scale that is required.  It would be too costly for them.  But, in my opinion, this is a short-sighted view.  The solution that may be coming is a requirement that any book seller, at any level, must warrant that the books it sells are free of any copyright defects.