As a particular fan of Tom Sawyer and Huckleberry Finn and other pieces by Mark Twain, I thought that this would be a particularly good book to which to listen, so I down loaded it from Audible and my wife and I started listening to it.  She lost interest almost immediately, but I carried on to the bitter end.

Mark Twain was the pen name of Samuel Langhorne Clements, (1835-1910), an American writer humorist, entrepreneur, publisher and lecturer.  His obituary in the New York Times, called him “the greatest humorist this country has produced”, and his The Adventures of Huckleberry Finn has often been called “The Great American Novel”.  He worked as a miner in California and as a riverboat pilot on the Mississippi River.  His pen name is the call of the leadsman on a riverboat reporting two fathoms beneath the keel of the boat – a safe depth of water. 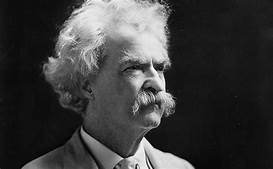 A Connecticut Yankee begins with the protagonist, Hank Morgan, wakes up after being hit on the head in early medieval England near Camelot, the mythical King Arthur’s kingdom, in an environment of chivalry, knighthood, slavery, serfdom, domination of the Catholic Church, and an autocratic ruling class.  Hank competes with Merlin, King Arthur’s great sorcerer, using nineteenth century technology to win the kings favour and become ‘The Boss’, the second most powerful man in the kingdom.  Secretly, Hank introduces gun powder, the telephone, hydraulic pumps, electricity, etc. behind the scenes in Camelot.  The average citizen of Camelot is depicted as a gullible illiterate, ready to believe the most improbable presentations.  Knights are hardly chivalrous, kings are tyrants and magic is everywhere.  Hank is challenged to joust with various knights and he defeats several by lassoing them, and the rest by shooting them with a pistol.   Eventually the church causes a revolt against Hank which results in a war of knights with swords and spears against Gatling guns and electrified fences, where the victors, except Hank, succumb to disease; Merlin puts Hank under a spell for 1300 years and then is electrocuted.

The novel is a satire of the romanticised views of chivalry in the middle ages; it is also an attack on the mysticism and the controlling nature of the Roman Catholic Church of the time.  The concept of time travel as a sub-genre of science fiction is significant in that it was followed almost immediately by several other novels.

I found the novel boring, probably because I have no romantic notions of knighthood and chivalry or misconceptions about the role of the Church which require correction.   There is one passage which lists just the names of a large number of knights.  I found it beyond credibility that a single nineteenth century engineer could build a ‘modern’ infrastructure in the iron age in only a few years.  Twain also mistakenly refers to steel armour well before it was invented.  Apparently Twain had a falling out with Sir Walter Scott who wrote romantic novels about chivalry and on whom he blamed the start of the American Civil War for Scott’s promotion of distinctive titles.  The story seems to have no unifying plot, but meanders from one set of circumstances to another at the whim of Hank Morgan.   The characters are largely one-dimensional, with the exception of ‘Sandy’ (Demoiselle Alisande a la Carteloise).  I found myself asking repeatedly, “What’s the point?”

Forget about the Connecticut Yankee; go with Huckleberry Finn.