There is an article form the November 1965 issue of the Writer’s Digest by Alma Boice Holland that was re-published in the March 16, 2020 issue.  In their lead-in to the article, WD says: “Today is Freedom of Information day and while censorship isn’t necessarily the same as withholding information, they are, to some degree, related. Here’s a piece from the November 1965 issue of WD by Alma Boice Holland with her thoughts about censors and the arts.”

WD says, “Alma Boice Holland’s published works range from a book of philosophical essays, to short plays, articles, short stories in a wide list of magazines from Family Circle to Saturday Evening Post.”  Below is the cover of a magazine which features one of her articles: 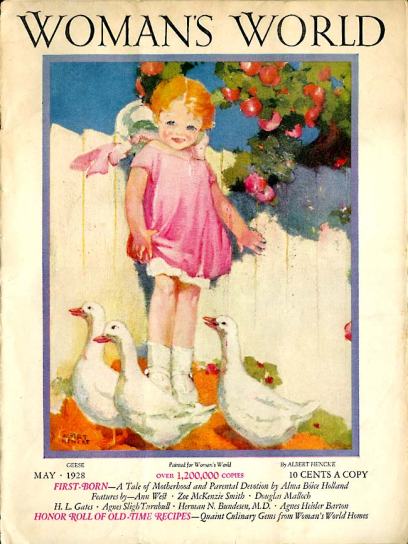 In the WD article, Ms Holland says. “Approximately one billion dollars a year is spent in the United States to decide what the public should be allowed to look at, hear, and to read. The output of obscenity in books, magazines, movies, television, and pornographic records has become Big Business. The United States Post Office believes the yearly output may reach five hundred million dollars. An equal amount is spent by the government and private censoring organizations to police the arts, and deny lewdness the protection of the Bill of Rights.

The battle rages continually and it is not occupied with sex alone. It can even be political and result in open book-banning. As early as 35 A.D. the Roman, Emperor Caligula, tried to suppress Homer’s Odyssey because it did not agree with his own thinking about individual freedoms.

Boston’s Superior Court condemned Theodore Dreiser’s novel, An American Tragedy, in 1930. While the publisher was paying a fine of $300, the book was listed as required reading in a Harvard English course. The next year, a certain bestselling book was banned in China. Want to guess? It was Lewis Carroll’s Alice in Wonderland. Want to know why? The objection was to the idea that animals could talk.

Practically anybody can be a censor. No license or other permit is necessary. There are two varieties, preventative and punitive. The first tries to stop material from reaching the market. He reads gallery proof, sees movies and television plays ahead of release, passes on magazine pictures, etcetera. He is not popular among the producers and publishers who often disagree with him.

The punitive censor arouses criticism after the book or play or other medium has already reached the public. It is then that he takes action. He is helped in this effort by the statues which are the laws in every state in the union. In addition, more than 150 cities have passed ordinances against obscenity. All of these laws can be used by the self-appointed censor. So why should his job be a problem?

It has become a problem because of the ever-changing moral climate. The general public is more lenient and the courts less biased. Movies and television plays are being shown today which most certainly would have been banned a mere decade ago. Books that were once sold from under the counter are now openly displayed. Inhibitions are fading away and, so far, there seems to be nothing to take their place. The censor is almost out of a job. He has been thrown so many curves that he has become bewildered. Is this good?

Over the years, and all over the world, there have always been these self-appointed guardians of the public morals. Some of the manifestations have been both strange and explainable. At the same moment that Gilbert and Sullivan’s The Mikado was being barred in London, for fear it would displease the Japanese, these same Japanese were applauding the score aboard their warships.

Do American readers need to depend on censors? Or can the censors depend on support from American readers? The subject is open to debate and the argument seems to be self-perpetuating. Each might consider the words of Lord Thomas Robert Dewar: “Minds are like parachutes; they only function when they are open.””

While Ms Holland’s name may not be immediately recognisable in the literary world – Wikipedia has no listing for her, Amazon has her 80 page book of essays published in 1969, Google seems quite uncertain – it is difficult to disagree with her conclusion.