I decided to read Richard Powers’ Orfeo (published in January, this year) when it was on the long list of ten novels for the Booker Prize. It has since been omitted from the short list for this year’s prize.

Richard Powers is an American novelist, born in 1957, in Evanston, Illinois. At the age of eleven, he moved with his family to Thailand where he became an avid musician. He began his studies at the University of Illinois at Urbana-Champaign (UIUC) with a major in physics, but he graduated with a BA in English literature, followed by an MA. He worked as a computer programmer in Boston, but he quit that job to devote time to writing. His first novel was published in 1985. In 1992, he returned to the University of Illinois as writer-in-residence. In 2010 and 2013, Powers was a Stein Visiting Writer at Stanford University, during which time he partly assisted in the lab of biochemist Aaron Straight. He was named the Phil and Penny Knight Professor of Creative Writing in the Department of English at Stanford in 2013. He currently teaches a graduate course in multimedia authoring, as well as an undergraduate course on the mechanics of narrative, at UIUC, where he is the Swanlund Professor of English. He has written ten novels and has won a number of literary awards. 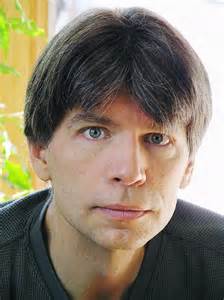 Orfeo follows much of the fictional life of Peter Els, a composer, music professor, and amateur bio-scientist. He dabbles in genetic experiments on bacteria and viruses in parallel with music composition, seeing similarities between the infinite variety of music and basic organisms. Els is driven not by fame or fortune, but by a compulsion to compose a piece of music which will have a lasting, ethereal effect on the listener. When he composes a piece which, for the first time, elicits critical acclaim, he refuses offers to stage it again.

The focus of the novel is on the sinister net of terror-prevention which tries to capture him when he becomes a bio-terror suspect, and which he tries to elude.

One has to admire Powers’ multiple competencies as a musician, as a poet and as a technologist. Nonetheless, this is not an easy novel to read. There are no chapters, and the shifts in scene and timeframe are sometimes difficult to follow. I say Powers is a poet because there are frequent passages of music description similar to:

“Then the damning glockenspiel, mute for three songs, silent for so long that the ear forgets the forecast from song one. Child’s toy, funeral chime, light in the night. A bell from out of the pitch-black; a shock but no surprise. A sound that makes hope sound primitive.”

If one is musically literate, and if one is familiar with the piece about which Powers is writing, I’m sure this would be lovely. (I was a singer, and I enjoy classical music, but never learned to read music.) Powers also uses unexpected nouns and adjectives in his descriptions. Sometimes, these seem very clever; at other times they are confusing.

The character of Peter Els is, for me, difficult to relate to: not because he is a musician or a bio-chemist, but because he seems, until near the end, to be a self-proclaimed, born loser. There are not sufficient likeable features with which to empathise. One shakes one’s head each time he makes a stupid mistake (mistakes which Els himself confesses), but there isn’t enough redeeming motivation for the mistake for us to understand and respect him, nonetheless.

Perhaps Powers was not aiming at any particular market when he wrote Orfeo. If you are an amateur composer or a competent musician and someone who is concerned about the encroachment of authority on our freedom of expression, Orfeo is a must read.

One thought on “Review: Orfeo”