I probably wrote about this subject quite a while ago, but it’s close enough to my heart that it warrants a re-exploration.

My publisher will produce two cover designs, and the author can have his/her choice.  To facilitate the process, there is a questionnaire for the author to fill out.  It includes such questions as:

I usually respond with a fairly detailed cover idea.  In the case of my second novel, Sin & Contrition, I didn’t have an idea, and I probably told the cover designer that the cover should reflect sin and repentance.  What came back was amazing, and I liked it immediately: 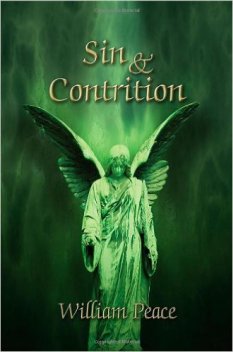 But with the five novels that have followed since, I have had to make more of a personal effort.

My latest novel, Seeking Father Khaliq, is a modern allegory about one man’s search for spiritual fulfillment.  It is set almost entirely in the Middle East, and many of the issues involve Islam.  As the title implies a difficult search, I told the designer that I wanted a Middle Eastern maze with the Dome of the Rock (the famous mosque in Jerusalem) positioned at the end of the maze.  What came back was a modern, three-dimensional maze with the Dome of the Rock floating on the horizon.  It just didn’t work.  Next, I found two, antique two-dimensional mazes to choose from, and I suggested that the Dome of the Rock (in miniature) be positioned at the success point in the center.  This also didn’t work; I gave up on the maze.

While browsing dreamstimes.com’s collection of mosque photos, I came across a single photo of some people ascending a long flight of stairs toward the Dome of the Rock.  That’s it.  But meanwhile, my wife, who has a much better eye for things artistic than I, had objected to the font proposed by the designer for the cover: “It’s a dated Western font; there’s nothing Arabic about it!”  So, on a page offering ‘free Arabic fonts’, we found one we liked.

What came back from the designer was a lot better, but I asked that the photo be enlarged and positioned at the top of the cover, and that the white highlights be eliminated from the font.  We’ll see what comes back, and I expect to introduce the book and its cover to you when it goes to press within a month.

It is true that one can’t judge a book by its cover, but the cover can play an important role in introducing the book to the reader!