I had heard of Nietzsche, the wild German philosopher who averred that “God is dead!” when I was in my late teens.  My college roommate seemed to know about him (and Ayn Rand), but I considered anyone who would make such a stupid remark not worthy of further attention.  And Nietzsche was not among the philosophers studied in the Philosophy 101 course.

But he came to my attention about 10 days ago when there was an hour-long BBC program about the man and his life.  In the program, the “God is dead!” exclamation was attributed to the untimely death of his much-admired father at an early age from a horrible brain disease, and to his view of the culture in late 19th century Europe.  As Nietzsche saw it, the culture was wantonly secular, and self-serving.  People cared only about entertainment, pleasure, wealth, status, and image.  His view was that we had killed God (who had been alive).

The novel I am currently writing has a similar theme: society has turned its back on God.  So I bought a copy of Nietzsche by Walter Kaufmann to compare my views with those of the great German philosopher. 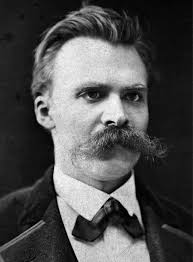 Walter Kaufmann (1921 – 1980) was professor of philosophy at Princeton University and a world-renowned scholar and translator of Nietzsche.  In fact, Nietzsche was first published in 1950, and has been through four editions, the latest appeared in 1974 in paperback.

It is clear from a mere perusal of the book that Kaufmann devoted much of his life to the study of Nietzsche, who was a difficult and somewhat opaque character, who fought with his mother and sister, and had a tendency to state his case in strong, sometimes extreme, language.  For these reasons, he was not well understood and attracted considerable criticism.  In fact, he became a hero of Nazi ideology, when some of what he said was either misunderstood or taken out of context.  Much of  this misunderstanding is owing to his sister who was an ardent Nazi, and who published re-written pieces of his work.  Nietzsche abhorred the German state and anti-Semitism.  His use of the term ‘blond beast’ was thought to praise Aryan purity, when, in fact, it had reference to the male lion.

The book begins with a history of  Nietzsche’s life: born 1844 and died in 1900, having slipped into insanity on about 1889.  He was made a full professor of classical philosophy at the age of 24; traveled extensively in Europe, and suffered from ill health.  He never married, but he proposed twice to Lou Salomé, a bright, strong-willed woman who was seventeen years his junior.

Nietzsche wrote fifteen books, there are also his lecture notes, his letters and his personal notes.  Rather than deal with each of his works one-at-a-time, Kaufmann addresses themes of Nietzsche’s work.  This is a better approach since Nietzsche made changes to his views from time to time.  Nietzsche was a doubter, a questioner, who took nothing at face value, yet he avoided the label ‘nihilist’ by attempting to establish pieces of a structure to replace what he had torn down.  He was anti-Christian because for him it placed too much value on faith and not enough on good works, and he called himself the Antichrist as a result of inconsistencies he perceived in Christ’s messages and actions, and because he refused to accept Christ’s divinity.  While he averred that ‘God is dead!’ because he thought people had turned their backs on God, it is not clear that Nietzsche was an outright atheist.  He seems to have had a belief in the possibility of God.

One of his better known ideas is that the basic human urge (more important than sex) is the Will to Power.  By this somewhat confusing term he meant striving to overcome the faults and weaknesses in ourselves to become as valuable human beings as we could be.  For Nietzsche there were three categories of humans which exhibited extraordinary value: artists, saints, and philosophers.  When one had overcome one’s faults and weaknesses, one became an ‘úbermensch’ – literally an ‘over man’, which has unfortunately been translated as ‘superman’, which wasn’t at all what Nietzsche had in mind: a sustained, an arduous, personal striving for self improvement which leads to happiness.  Coupled to Nietzsche’s concept of the úbermensch was the idea of ‘eternal recurrence’.  This latter was the unconditional and infinitely repeated circular course of all things; unfortunately, even if one assumes that time is infinite, this has been proven impossible.

Kaufmann is at his best shedding light on Nietzsche’s intentions, his values, and his thought processes.  As a result there is an enormous amount of detail in the book: footnotes and quotations from a wide variety of sources.  Occasionally, the logic of an argument becomes murky, but Kaufmann’s straightforward approach clarifies both the distinct character and the great contribution of this philosopher, and restores his stature in the face of unjust criticism, poor health, broken friendships and little happiness.

If one wants to understand Nietzsche as a whole philosopher, this book – rather that any two or three of his own books – is the one to read.